Shakespeare or Space Wars opens in less than a week! As the Players put the finishing touches on props, costumes and scenery… and even our script… we want to share an inspiration that has had a big influence on those essential elements of the play: Little Monster’s Mother Goose by Mercer Mayer. It’s a children’s book that features monster-creatures putting on a play — not unlike the Players!

Little Monster’s Mother Goose was published in 1979, meaning it was just in time for Madame D’s childhood bedtime reading list. And it must have had an impact… Little Monster must be convinced to put on a play, and how the play happens — including what happens in the audience — is more interesting than the nursery rhymes themselves.

In fact, it’s almost impossible to read this book in any sort of linear or methodical fashion — visual and word puns are scattered about, and the pleasure in reading it is seeking them out and finding something you hadn’t seen before. 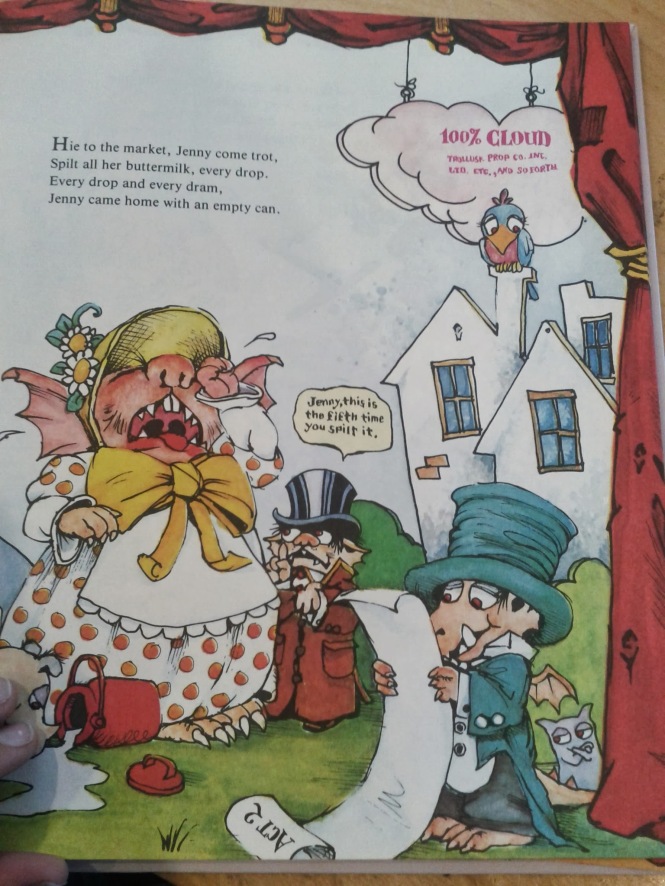 What’s more, none of the characters can let an opportunity for a comment, question, or delicious opportunity to lap up spilled milk pass them by.

The audience is having a great time, too — even if they’re not behaving “properly.” 🙂

We hope you’ll be part of our audience for Shakespeare or Space Wars September 10-24!

We of the Peripatetic Players are influenced by a great many groundbreaking works of art and legendary theatrical ensembles, which inform both our process and our craft. One of the most seminal of these is surely The Muppets — and for Shakespeare and Space Wars, no Muppet episode is more resonant with our own creation than “Pigs in Space with Luke Skywalker”

I particularly love Piggy’s classic handling of the inappropriate comments about her weight — it’s clear she’s had to develop an iron-fist style of management to keep the show on track. Perhaps Mr. Peaches could learn a few things.

But that’s not all… the stars of Star Wars appear in the entire Muppet Show episode, number 17 from Season 4 of the show, and perform a spectacular dance number at the end.

And, many years and one corporate purchase later, Muppets cast as Star Wars characters to create mashed-up action figures have striking similarities to the casting of Peripatetic Players as both Muppets and Star Wars personalities. Gonzo as Darth Vader? Beaker as C3PO? Obviously.  And make special note of the Storm Troopers…

We have our own ideas as to which Peripatetic Players correspond to various Muppets… some of them are definitely reflected above.

Which Muppets do you think most accurately reflect Peripatetic Players?

Thumper has been lobbying the Players to determine how they’d cast themselves in Thumper’s adaptation of Star Wars, named Space Wars. You’ll have to see the show to find out who’s who!

An interview with Rebecca & Joan

Rebecca and Joan — who when not embodying Mdme. Directrix and Thumper, respectively, are the SPPP’s producing organization, Idiot String — sat down after one of the final Aesop Amuck rehearsals with none other than Sam Bertken (a.k.a. Meekins) to talk about their inspirations for both Aesop Amuck and the Peripatetic Players’ debut adventure, O Best Beloved.*  Sam writes for S.F. Theater Pub,** a great blog about theatre and the independent theatre scene in the Bay Area that is run by producer, playwright & director Stuart Bousel.

We talked about influences like Mercer Mayer & Maurice Sendak, the Muppets, and Medieval & Renaissance theatre, as well as why performing on FluxWagon and breaking the fourth wall are so important to us. Read the interview here!

*Please note there are a couple words bleeped out with asterisks in this article that, if unbleeped, would be inappropriate for young audiences!

**Please also note that the content of S.F. Theatre Pub in general is aimed at adult audiences, and some topics elsewhere on the site may  not be appropriate for kiddos.

There’s still time to donate to our Kickstarter Campaign — until late Monday night!

Thumper as Paris in Shakespeare or Space Wars (2017) 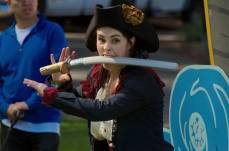 Princess Gwen as the evil Lady Blackhat, about to climb aboard the Good Ship Peripatetic. Photo by Tim Guydish.

The Hare gets a running start in AESOP AMUCK, August 2015 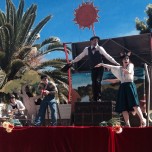 Mr Meekins warms up for what will be, unbeknownst to him, a stunning turn as the young lover Romeo 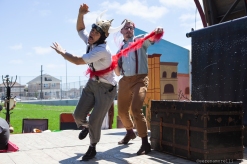 Thumper (Joan Howard) as Tybalt gets thrown out of the party thrown by Lady Capulet, played by Percival Perkins (Soren Santos) in Shakespeare or Space Wars. Photo by Serena Morelli.

Thumper as a frog ready to have some fun in the frog pond during AESOP AMUCK. 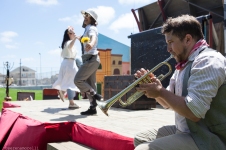 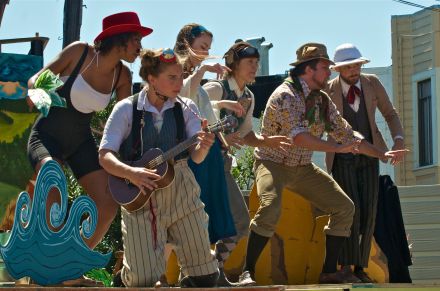 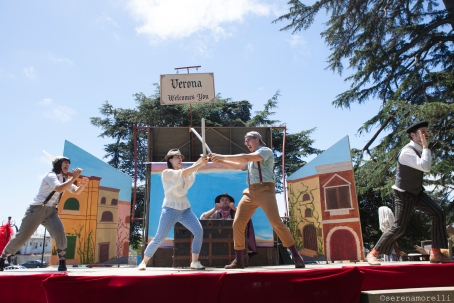 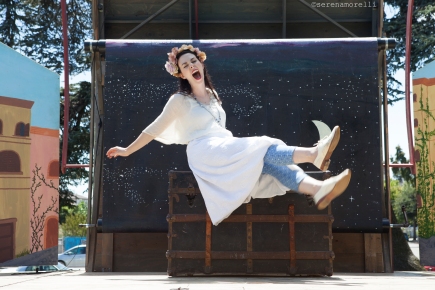 Princess Gwen as Juliet in Shakespeare or Space Wars (2017)

The Peripatetic Players set up their stage, FluxWagon, in front of the Port Costa School during the 2015 Bay Area tour of AESOP AMUCK. 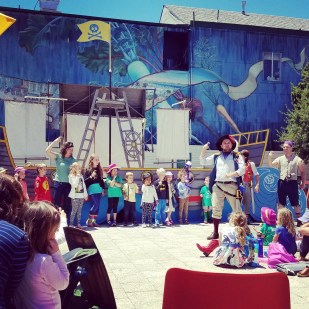 Samuel Peaches (Casey Robbins) as Captain of the Good Ship Peripatetic with new recruits to his pirate crew. 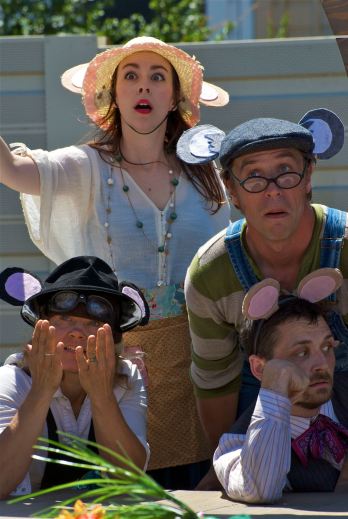 The Mouse Council is at a loss over what to do about the local cat in AESOP AMUCK. Photo by Tim Guydish. 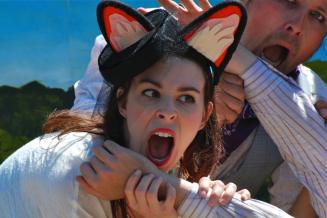 Princess Gwen as a hungry fox in AESOP AMUCK. Photo by Tim Guydish.

Frogs get more than they bargained for from a simple game of skipping stones in AESOP AMUCK. Photo by Tim Guydish.

A small pirate looks toward the Good Ship Peripatetic during “Shiver We Timbers” at Lincoln Park, Alameda, 2018.

Meekins gets a serendipitous fly-by from a pigeon in Noe Valley during a performance of O Best Beloved in 2014. Photo by Tim Guydish. 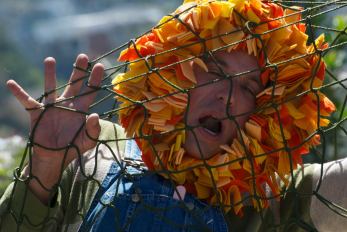 Guy Hank as the Lion in AESOP AMUCK. Photo by Tim Guydish. 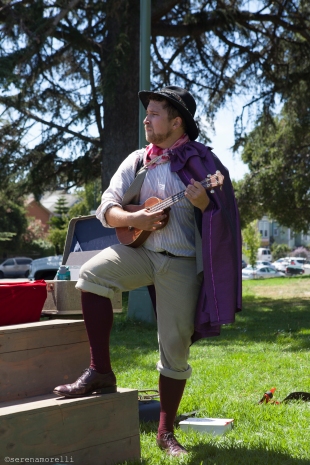 Samuel Peaches as Prince Escalus in Shakespeare or Space Wars (2017) 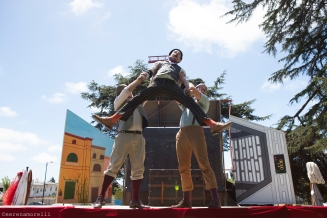 Meekins gets a lift in Shakespeare or Space Wars (2017)

We send out periodic e-mail updates -- just a few a year -- to announce our events and performances. Sign up at: http://eepurl.com/bFEaEb

In this picture, you will not only find: